Don’t leave it to the judges.

9 out of 10 fights, there will be a controversial decision if the fight goes the distance. From the local level to the world stage; some truly epic fights have been overshadowed by so called “bad judging”.

Here is the thing – every judge sees a different fight & at the end of the day they arent the ones in the ring.  So even if you dont like the decision made at the end of a fight –  its a bit rough to blame them when you were the one in the ring actually fighting because you had every chance to make it ultra-decisive with accumulative damage or even better, just knock them the F$#K out! That would take away the judges having to make a decision all together.

I have fallen “victim” to this many times. In particular when I fought the great Mike Zambidis in Athens Greece in 2015 for Zambidis’ retirement fight in front of over 10,000 people. Though I believe I did enough to win that fight on the night via points, I lost.

But who am I to argue the decision when I left it to the judges? It was a very close back and forth fight and being his retirement fight I knew I would more than likely have to win by knockout if I was going to walk away with a win that night. It’s easy to say “I should have, I could have” But I didn’t! 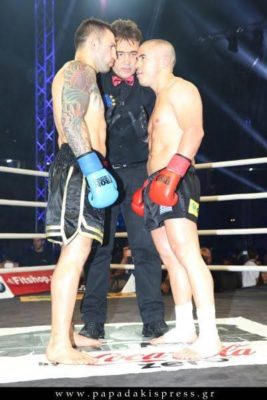 These experience has had a big impact on my coaching when I am teaching Muay Thai kickboxing and Boxing at The Training Room Geelong. I place a a lot of emphasis on combinations, punches in bunches and a strong defence. Don’t get sucked into that back and fourth game of tennis. Its always your turn!

If you want a win, work relentlessly for a knockout and don’t leave any doubt that you are the winner of that fight.